Autpek and myself will be hosting a wipeout tournament tomorrow at 19:00 UTC. Countdown here

The total prizepool will be over 500k!
Hope we see you there!
2

Awesome, will get the protection set up even though it's technically not necessary

No it is still empty, longing for you to return and give it some love

Remember that you can post in the inactivity board if you plan on going inactive and want to keep your builds!
9

T4 and myself will be hosting this week's weekend event, which is Kart racing, on Sunday at 20:00 UTC (click this for countdown)

I've added an alternative recipe to the Cargo Manager for SlimeFun, which can be found under the new SFT Custom category. It replaces the unobtainable Holographic projector with a "Billon ingot". This recipe gives you a "coupon" which will turn into a Cargo Manager when you right-click with it.
12

Dogggeh and I will be hosting Tower Grassluck this Sunday at 10:00 am UTC. (click for countdown).
The prize will be 300k!

What's tower grassluck you ask? Join us on Sunday to find out!
13

For a few weeks now I've been reworking the voterewards plugin and config, which has resulted in the following changes:

New features:
- The plugin now tracks your total votes, vote streak and highest vote streak
- Milestones: When you hit a certain amount of total votes you'll get a Milestone reward, which may include specific rewards or getting a reward from a high tier. For example voting for the first time will give you a bonus 3 steve co crates and keys!
- /vinfo to give you information about your voting stats. /vinfo player to see that of another player (member+ to use)
- /vtop votes/current/ever to see the people with the highest amount of votes, highest current voting streak or highest ever voting streak
- Tiers are now determined by your vote streak.
- Grace period: If you miss voting during an entire day as counted by the server, you'd normally be reset back to tier 0 (and vote streak 0). With the grace period if you vote within 5h of the server "resetting the day" (which it does at midnight UTC) you'll keep your streak!
- New special tiers: 5, 6 and 7. These do not occur as often as 0-4.
- Tier 5 occurs once every 30 days, so when you've voted 31 days in a row tier 0 will be replaced by tier 5. Next time will be at 61 days. Tier 5 rewards are worth 100k on average (2x as much as tier 4)
- Tier 6 occurs once every 100 days, using the same logic as above. You'll also get a reward from tier 6 every time you hit a multiple of 300 votes. Tier 6 rewards are worth 200k each on average.
- You get a reward from tier 7 each time you hit a multiple of 1000 votes. Tier 7 rewards are worth 1m each on average.

Rewards have also been revamped! They now include lots of different items, with many new vanilla, pyrofishing, pyromining and slimefun additions. All tiers are at least as good as they were previously, and some of them have been buffed significantly!

Some of the new rewards include artifacts, dolphin tails, diamond ores, mythical fish, sifted ore, concrete, crab scales, fossils, shiny spawn eggs (rare so you won't get too many), rare steveco crates and keys, shulker shells, player head coupons and a very rare nether star. There's around 200 different rewards, which is too many to list so you'll have to find out for yourself by voting!

Something to be aware of is that we'll have to wait to get data from other databases, so everyone will get their first vote reward as they vote for the first time after the update.

Votetokens are a bit less common than before, around 10% less.
14

I do have a couple of suggestions:
- A forum section for the Creative server, with a General board and one for showing off your builds.
- Make an actual spawn that's more than a hut, things to include could be:
- Build showcase (a number of warps to good builds we'd like to showcase)
- Bigger tutorial with the /plot commands
- Basic worldedit tutorial
- Other commands
- Rules!
- Ranks and their benefits
- Use the 12 plots that are around the central 4 plots (all of those are claimed by BluetigerESW) to house build contest winners or just some really good builds
- Themed build contests.
- Some kind of place for people to post builds looking for advice on how to improve(different than just showcase)

Quote from: George on Jan 19, 2021, 06:40 PMI suggest using different kinds of skulls for the type of spawners on /spanwer instead of just zombie skulls.

I'll bring that up!

Quote from: winston_b on Jan 30, 2021, 03:30 AMJust a quality of life thing, but is it possible to either turn off or lessen the number of slime fun "this item does not work in this world" messages while in w3? I feel like it can get too spammy.

I can try and ask the SlimeFun devs if they can do something about that. But since it's a 3rd-party plugin it's mostly out of our control

I am working on revamping the rewards you get from votes, and without getting too much into it, it has required me to redo parts of the plugin's code.

One big consequence of this is that every reward you've got while voting offline and not claimed yet will disappear when we launch the update.
Do /claim now to not miss out on your rewards!

It may also be possible that everyone's tier will reset to 0 when we launch the update. I'm sorry about that, but there's not a lot we can do.

When will the update launch? Depends on how quickly I finish coding, could be tomorrow, could be next week, hopefully not later.

Do you have a suggestion for vote rewards? Post it here or DM me. Since I'm redoing the code it could also be structural changes, not just suggestions for what rewards you get.
18

On Saturday at 16:00 UTC (click here for countdown) I'll be hosting a wild wacky spleef tournament where we'll be playing several rounds of very different spleefs to challenge you, and there'll be big prizes.

Materials are going to change between rounds, so bring your entire toolkit, you never know when you'll need it 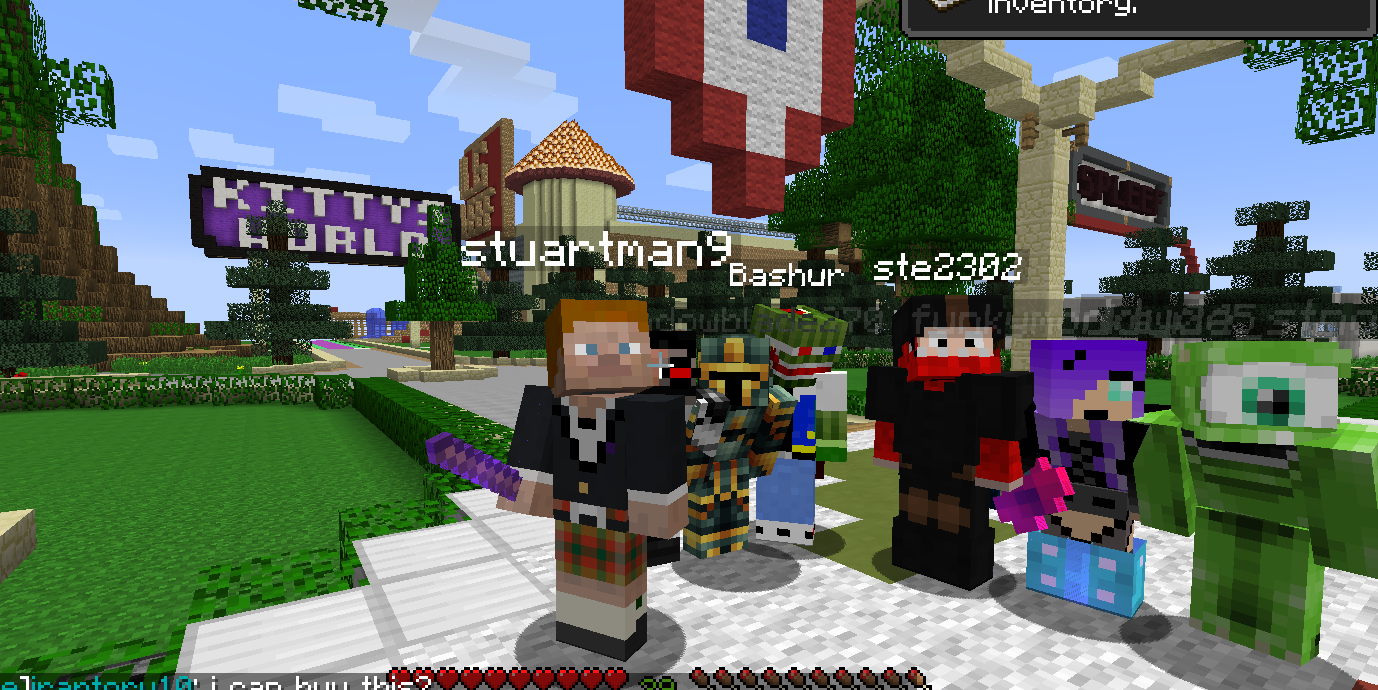 Dec 17, 2020, 08:33 AM
On sunday MasterX70 and myself will host a special treasure hunt, where instead of the prizes being in a small little box in W3 they can be anywhere

Put on your thinking caps and ready up your votes, because they'll be needed if you want a chance at finding our well hidden treasure!

We've switched our pets plugin to one that actually works now

It includes almost every mob in the game as a possible pet, and also the ability to ride your pet or have it on your shoulder!

It's a single unlock instead of multiple packages now too, however if you had the old pets unlocked don't fear! Everyone who did will have perms to the new plugin as well! (as soon as xQuic is done transferring them)

The main command to use the plugin is /pet (not /pets). Do /pet list to see a list of all possible pets, however the list includes the few pets that we've disabled like human and traderllama.

Our entire premium shop has a 30% Christmas discount right now, head over there to get access!

Today we've had a big update to PyroFishing, which introduced and changed a lot of features so I thought I'd list the most impactful ones:
- Fishing totems with all new upgrades! Available from lvl 20 PyroFishing

- Party fishing! For every other active fisherperson within 30 blocks of you, you get a bonus to entropy and experience from catch fish. Stacks up to 3 other players, at which point there's a 50% bonus!
- Entropy boosters and crab, platinum and mythical lures now work! (check with /fish boosters to see if you have any active)
- Crab spawn chance is now 2% (from 4%), but drop chance of items is 30% (from 10%) plus looting works, each level adding a flat 3% drop chance.
- Dolpins now drop dolphin tails 40% of the time (from 30%)
- Added fishing related rewards to tournaments, including a participation reward!
- Tournaments are now on a 90 min rotation, compared to 120 before.
- Some of the augment recipies have been changed
- There's now 12 fish of each tier of bronze, silver, gold and diamond.
- Killing fish now gives no entropy/experience. (The actual fish mobs that you can hit with a sword)

If you have any questions feel free to ask.
Otherwise, let's fish the oceans dry!
25

I'll get the protection set up correctly the next time I'm on!
Pages1 2 3