General Announcements / Re: Should we donate $50 /mo to a charity if our funds allow it?

Quote from: sommergirl41 on Apr 07, 2021, 08:03 PMthis is a good idea. maybe you should consider donating to black lives matter, considering you dismissed the support of it and threatened to ban people who showcased their support for it!

gotta start somewhere, am I right?

What a huge set of balls you must have omg

General Announcements / Re: Should we donate $50 /mo to a charity if our funds allow it?

Apr 07, 2021, 08:25 AM
As someone who has been around when SFT was struggling with funds I would rather have SFT keep them incase it's needed in the future.

But if you really want money to a charity you could add an option in donations where people can decide if they want a portion to go to charity.
3

General Announcements / Re: [Survival] Death coordinates is back (with modifications)

General Discussion / Re: Curriculum Reading Around the World

Jan 24, 2021, 07:33 AM
Denmark. From what I understand we had to read atleast one of the following authors works each. My teacher decided these were the ones we had to read.

Dec 03, 2020, 01:20 PM
Idk if it counts anymore but Dpa. The amount of times luck fucked him over and he still managed to put his heart and soul into Pixelmon. Even though it's been years I still remember first time I had problem getting on there and he took time off to personally make sure I could get back on. Sorry if it doesn't count anymore due to the change of his rank but for me, picking anyone but him wouldn't be fair despite the amount of good competition there is.
8

Sep 19, 2019, 07:50 PM
Just an idea, if it is gonna be for more than bragging rights eventually then it could be kinda cool to have the Team kits upgradable for limited time. Currently they have the team symbols in them but could make something like "most legends gets pokeballs added to their kit for a week" or something like that
9

General Announcements / Re: What would keep you coming back?

Sep 19, 2019, 07:46 PM
We have it on pixelmon where you get free rarecandy, after day 5 the reward doesnt get bigger but just streak can still be made bigger just for fun. Don't have to give anything that becomes crazy after a few weeks.
Works really well on pix to the point theres fear for missing a day xD
10

General Announcements / Re: [Reminder] Please vote for us!

Sep 01, 2019, 02:59 PM
Pixelmon still doesn't support votes after 4months so difficult to encourage people to vote.
Due to majority of the voting sites benefitting Survival it adds more struggle.
I get it, 1 community so helping survival -> helping Pixelmon too it's just that when even staff aren't encouraged to vote then doubt Pixelmon players that just play Pixelmon will take the time.
11

General Announcements / Re: Pokemon on Survival?

Jul 26, 2019, 08:25 AM
GASP. POKEMON.... IN MINECRAFT!!!!! :Surprisedpikachu:
Hope survival enjoys the feature but would personally like if Pixelmon modpack got some advertisement in the post here just to point out that it isn't a competition between the two (which tbh a few people already think it is).
12 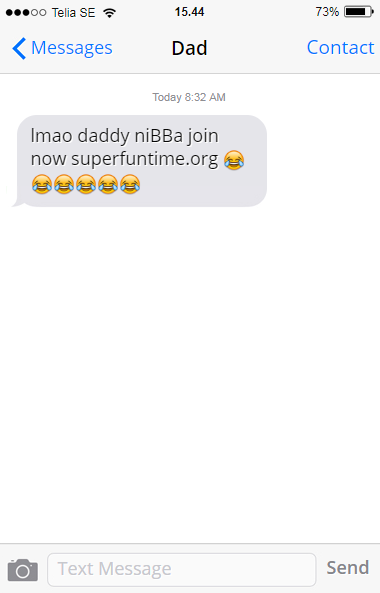 Uhm, not sure that's a valid way to enter xd

how many random people on phonebook would one have to send random msgs (with the ip + link) to before it counts? xd
14

Quote from: Towelie on Feb 04, 2019, 09:04 AM@JustAddWater @Nubbun  - You are both current or former high ranked staff, so me having to remind you this is rather unfortunate. Please do not hijack threads / post off-topic in threads that are clearly meant to announce a new server.

Geez someone got wrong leg out of bed this morning....It's not like this post was a landing page or anything so why so serious about the replies?
nvm no need to answer
I'll leave this topic just cuz it bothered you. I would be surprised if I in the future I only replied "thats epic" "good job"
just because former staff role. So can't really recommend getting your hopes up about me remembering the unfortunate reminder in the future. (i'm very forgetful)

Spoiler: show
I love you too loasty don't worry
16

Feb 03, 2019, 07:13 PM
Why not just mix dj and evh together since the dj's hold events? only reason there was dj's with the musicbot was cuz it could specify the rank as a dj and give them perms to restart/summon the bot. Unless blue fixed it then i don't believe picklerick can do that (yet atleast since when i checked there was quite the amount of disabled commands).
Also cough cough, your signature has a word that starts with H which isn't heart
18

General Discussion / Re: What show/movie would you recommend?

Cartoons:
First off, +1 for steven universe.
Gravity falls
Over the garden wall
Young Justice
X-men Evolutions
Last airbender
Legend of Korra
and just because i wanna piss off some people i'm gonna mention Future Diary here since it is a good anime but i don't wanna make a catergory called anime

General Discussion / Re: What's the best thing that has happened so far?

Glad we agree, hope instead of February 1st we'll just all wake up and realize we dreamt everything that happened 2019
20

General Discussion / What's the best thing that has happened so far?

I can probably answer that one; to find the next big thing to get the community back on it's feet again

For some reason the link to the Premium Shop doesn't seem to work for me. Or does it only work 30% of the time during the discount?

We used to be able to in the past, was called "graveyard", guessing it got privated when people started being dramatic over everything. To avoid someone going back to the past and bringing up arguments that had died down.
Thats just my guess of course, none the less interesting question.
Pages1 2 3 ... 16