Support us on Patreon and get exclusive perks!

General Announcements / Re: I will supply karts to anyone who builds a cool track!

Will update track now that its getting used.

Finish it up and re-apply with pictures too pls
2

General Announcements / I will supply karts to anyone who builds a cool track! 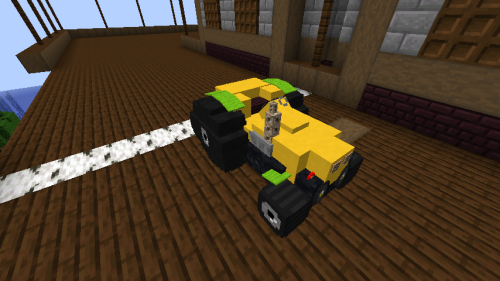 Want some Karts for your Go-Kart track? Build a cool track, post a picture of it here and then you can get up to 4 Karts.
Those karts will be for you to give to anyone who wishes to play on your racetrack, and we are going to feature the tracks in a /kart command, so i encourage you to get creative and build the most unique track!

Karts are modified tractors, who do not farm but go at an increased speed, fast enough to be fun but slow enough to be controllable (unlike cars and bikes and other vehicles which are too fast to make a fun race).

Karts are otherwise unobtainable, so this is your only way to get them.
To the players - I'm sure you will be able to play Go Kart on a track of your choosing

PS: I will also be subsidizing anyone who takes me up on this offer with 500k empbucks. Meaning i will give you 500k empbucks upon completion of an appropriate track (a tractor can be 2-3 blocks wide so tracks need to be wide enough)
3

General Announcements / Re: Under attack

We are currently under attack by a sub-group of '2bt2' "for being pay to win".
Since we are not pay2win, and there are probably thousands of other servers way worse there, the running assumption is that they were mislead by someone to attack us.
As our general policy is to not negociate with hackers/blackmailers/script kiddies, we are not negociating, and instead doing our best to mitigate the attack and keep as much as possible of our infrastructure up.
We have currently banned almost 4000 ip's and countless nicknames and we will continue to do that until the attack is over.
Frankly, I haven't seen anything impressive in this attack, other than its scale, which is larger than average and while they will manage to probably take down our site from time to time, most of everything else should stand.
There has been no breach on our servers, there is no reason to believe any data was exfiltrated or leaked.

If you are playing on a VPN, you will notice you can no longer join. However, if you are Member or above, please contact any manager+ from the server you play on and they will whitelist your nickname to be able to join via  a VPN.

Jan 12, 2021, 07:54 AM
I'd say that your problem is not knowing when to stop and not knowing when enough is enough, not mis-spelling George's name.
If I'm not mistaken this isn't your first ban, and definitely not your first bullying.
Why should we threaten the new found silence of SFT in order to unban you? How can you prove that you just won't display the same behavior again in a few weeks ?

I often find myself hanging out with people who I am not in a party with, and would love to just talk to them without spamming public chat. I'm sure i'm not the only one who has been in this situation, so it actually would be really useful.

please also tell me 3-4 words about your spawner, like a mini description
9

please also tell me 3-4 words about your spawner, like a mini description
10

definitely, talk to an admin
12

General Announcements / [Survival] Add your town/shop/spawner for free in January!

Jan 03, 2021, 04:10 PM
For the month of January, we are going to be adding towns/shops/spawners to /town /autoshop /spawner.
In order to get your shop added, please fill in this form and paste it as a reply to this topic:

if i say yes does that make it true?

General Survival Discussions / Re: So I somehow died while offline?

Quote from: Canner1 on Dec 30, 2020, 05:53 PMI log back in this morning to a message that said I was dead, didn't say to what, but the real kicker is that I died while I was logged out and offline for like 10 hours... I didn't afk, I closed out of the game. I had a full netherite kit with all the bells and whistles, can someone help..?

General Survival Discussions / Re: Anyone remember me?

General Announcements / Re: [Forum+Discord] Get Forum Notifications direct to your Discord!

Dec 17, 2020, 09:02 AM
I am looking for feedback from players that have either stopped playing on SFT or haven't played in a long time. Just a few questions, the answers will only be visible to Owner+:
https://forms.gle/jYYNLXBskcJbrEAk6

PS: I would really appreciated if you could pass this to your friends who also have stopped playing SFT (PS: Unless they were banned)
19

If they are, that's ok. But can we make sure they are not more? I'll get Managers+ to look into this
20

General Survival Discussions / Re: Allow members to use pstats on other players

Dec 09, 2020, 08:50 PM
@Drako_dragon777 Can you confirm you gave netherite stuff to RamLeague?
Survival staff - Please review xraying evidence and make a decision based on that and drako's response.

Dec 05, 2020, 03:31 PM
My favorite staff member is every staff member for keeping SFT safe and for helping players <3 Thank you for your service staff of SFT, whether you are an EventHost or an Admin!

Quote from: Nubbun on Dec 03, 2020, 01:20 PMIdk if it counts anymore but Dpa. The amount of times luck fucked him over and he still managed to put his heart and soul into Pixelmon. Even though it's been years I still remember first time I had problem getting on there and he took time off to personally make sure I could get back on. Sorry if it doesn't count anymore due to the change of his rank but for me, picking anyone but him wouldn't be fair despite the amount of good competition there is.

It counts. Even though Dpa doesn't have the Owner rank rn, it doesn't mean he's not still as much Owner as I or anyone else is. here and sft is not only incomplete without Dpa, but wouldn't really be what it is today without him
24

General Announcements / Who's your favorite staff member and why?

Tell us who your favorite staff member is (any staff from any SFT server), and why.
Let's get some appreciation going!
25

General Announcements / Re: Looking for someone to make the next "board game"