I will not miss your lag factories though good sir!

now that shiv is gone too, nobody is there to make any more lag, reality as we know it is collapsing
2

Sep 14, 2019, 04:29 am
Hey guys, I'd just like to make a post because I'm resigning. I'd just like to say I really enjoyed these 3+ years here and I made lots of friends and I'll truly miss you all. You really made me feel welcome here and I loved it and I really appreciate it. I'll drop by every once in a while, probably a lot, but I just won't be a Mod.
3 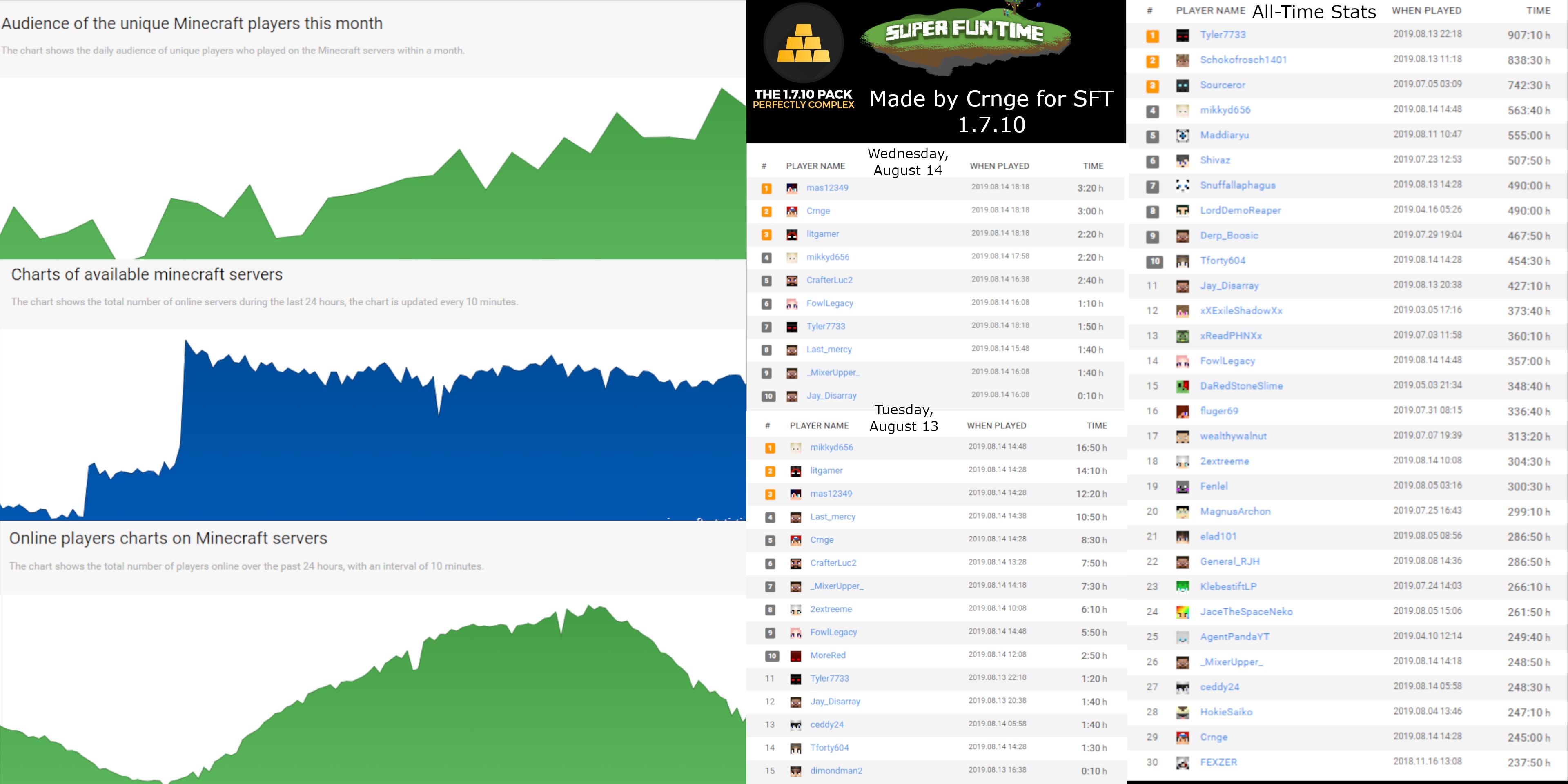 Now, this is the first post for 1.7.10, expect a lot of updates for next time! Most of the stuff on the left was irrelevant, but was for Minecraft itself.
7

General Survival Discussions / Re: My Resignation

Giveaways / Re: Win a month of Discord Nitro!

Aug 03, 2019, 02:08 am
IGN: Crnge
What is your uptime in the last week (/pstats)?: 25h:02m
What is your total 1.7.10 uptime(/pstats)?: 183h:51m
Have you ever been banned on SFT?: Yes, I spammed on Discord. I have learned from my mistakes and regret them deeply. This happened around February I believe.
What core mods do you know and to what depth?: A bit of AE2, bunch of Thermal Foundation and Minefactory Reloaded, some Galacticraft, Magical Crops, bit of Mekanism, some EnderIO, Big Reactors, BuildCraft, a bit of Extra Utilities, Modular Powersuits and more.
What rank do you wish to be (EventHost/JMod)?: JMod
What do you wish to accomplish given that rank?: I've noticed a lot of people joining and suffocating or dying to fall damage due to the personal dimension join glitch as well as how I've seen many people going AFK when no staff are on (mostly due to timezones) and I'd just like to help the server get rid of cheaters/hackers/exploiters, spammers and just people who break the rules in general.
Anything else?: I have experience as I am an MCPE Mod. Since MCPE isn't doing very well (lack of players) I'd like to be able to help more.
11

General Announcements / Re: Its been a good run

General Announcements / Re: We need to find the next big Minecraft

In my opinion, not many suitable replacements are here yet, we may have to wait until the releases of MANY more games until we can find something suitable, because Minecraft was perfect. I'm going to be on the lookout for games that will suit SFT. plz appreciate me bcos I wrote this msg wit lots of lag
15

General Announcements / Re: Creative has been updated to 1.13!

I have proof! Either you placed it in the wrong section at first... or it glitched...
Also, this was clickbait, I checked my alerts hoping for something about my birthday but it wasn't

General Announcements / Re: [BTeam] Nether has been reset!

NOO, BEES. GET UR PUNKTUASHON RITE
17

Ew I hate fish in real life dead, alive and cooked. We had to raise rainbow trout and release them last year EW bad times...
23

General Announcements / Re: Regarding MusicBot and Discord Bots

General Announcements / Re: It's against the rules to sell items for real money